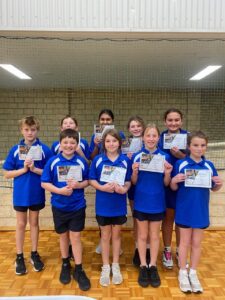 It was a close and entertaining game but…SPPS Team 1 were defeated 10-4 by Tambellup in the Mixed Year 5/6 comp at the Great Southern Primary School Cup in Katanning today. We had two mixed Year 5/6 netball teams travel up to Katanning on the bus with Mount Lockyer Primary School.  They competed against teams from Lake Grace, Katanning, Fitzgerald, Gnowangerup, Kojonup and Tambellup.

Huge thank you to Miss Upson and Miss Ditchburn for their coaching expertise, we appreciate your time and energy. Thank you all of our players for doing their best in representing SPPS.  It was brilliant to see nearly 30 students opt in for the netball team trials in the weeks leading up to today which is fantastic.  Unfortunately we couldn’t take everyone to Katanning but we were impressed by everyone’s enthusiasm for being active and wanting to represent SPPS in the netball carnival, well done!

Special thank you to Gemma Ditchburn and Chelsea Sobik who generously gave up their time to be our representative umpires.

Team 1 finished top of Pool A hence their grand final game.   Team 2 finished fourth in Pool B and had a great day working together as a team.