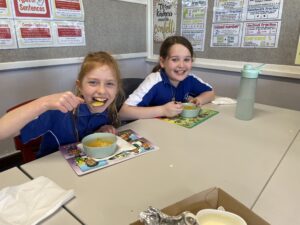 Mrs Kowald’s class sat down together on Monday to taste their pumpkin soup. They worked as a team to set the classroom tables like a restaurant complete with placemats and cutlery.  The students took on the role as waitstaff to serve up the soup and delicious garlic bread. There were mixed reactions to the soup tasting. Students reflected on their tasting experience in writing and critiqued the pumpkin soup with a rating. Here’s what they had to say:

Afterwards, the students cleared the tables, washed the dishes and started planning for the next cook up – YUM! Have a look at their photos here.